Lions are incredible hunters; whilst their group success rate is about 30% they often kill even when not hungry and are fairly indiscriminate. Their immense power and sheer presence have made them a must see for visitors to Africa who will never forget being eye-balled by those penetrating orange eyes. In spite of this (or maybe because of it) I got a particular kick from this morning’s sighting of them, well and truly on the back foot against two sub-adult White Rhinos.
I found two Lionesses and one adult male Lion lying and playing in the long grass near the road. As the wind was blowing in my direction the two White Rhino who appeared from behind the trees didn’t initially see the Lions, and I expected the herbivores to move off fairly quickly once they did. The Lions instantly caught the Rhino’s scent and I couldn’t help but smile as they started to stalk them. Like Elephants, White Rhino adults have very little to fear from Lions unless they are injured or have small calves that are at risk of being caught. The big cats were either taking their chances or their natural instinct to stalk everything came into play.
As soon as the Rhinos noticed the Lions they seemed to do an initial assessment and then completely ignored them, continuing to feed in their direction. When the Lions got too close the Rhinos chased them and they were forced to back away. Soon after a game-viewer with Thanda guests arrived and over the next hour and half we were treated to a wonderful sighting of the cats being constantly forced to give ground to the two Rhinos which perversely seemed to want to feed wherever the Lions were lying. Twice one of the Lionesses was forced to climb a tree and at one point the Rhinos were so relaxed that they were feeding with their noses less than two metres away from the Lions before the cats were once again forced to give ground.
Watching the Rhinos give the Lions a run for their money I reflected on the impact of Rhino De-horning (which is used by some game reserves across Africa to protect Rhinos from poaching) and wondered whether this encounter might have been quite so one-sided if these two White Rhinos had lost these important defensive weapons.
Text and Pictures by Alison Squance, Thanda Safari Wildlife Team 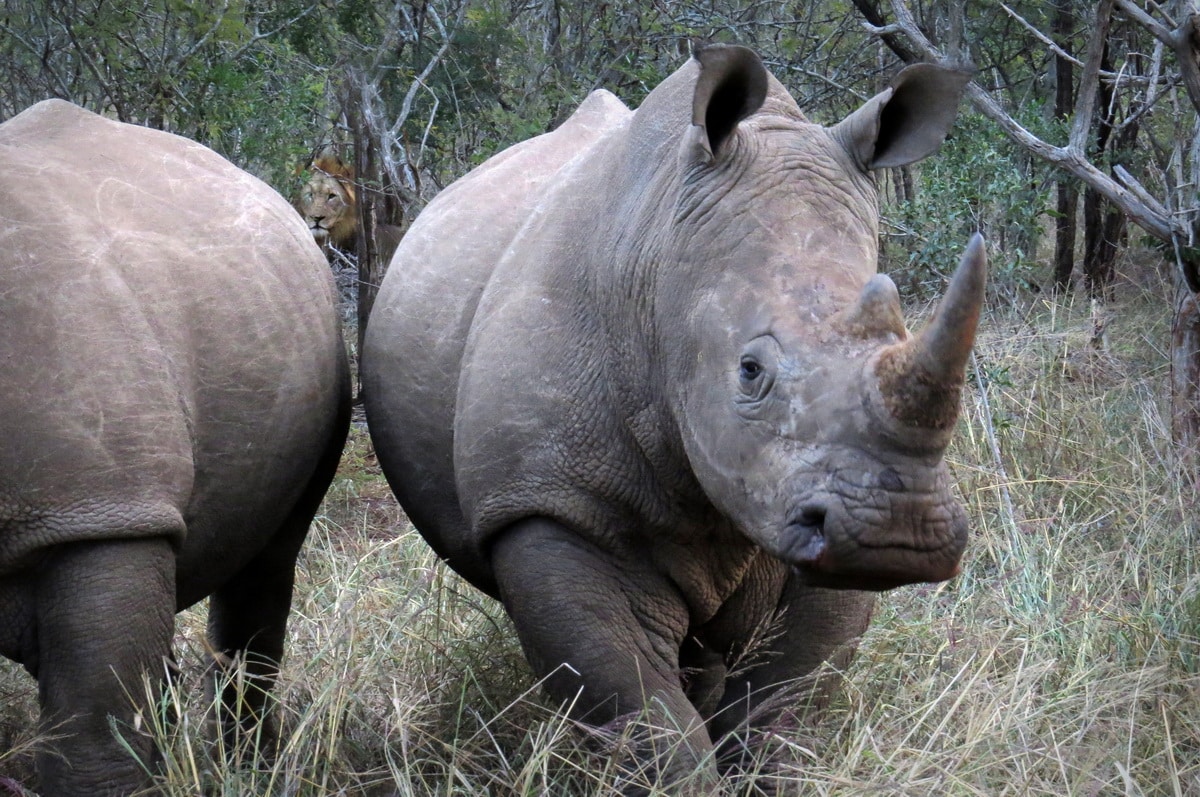 White Rhino with its formidable horn – do you see the ‘photo-bombing’ Lion? 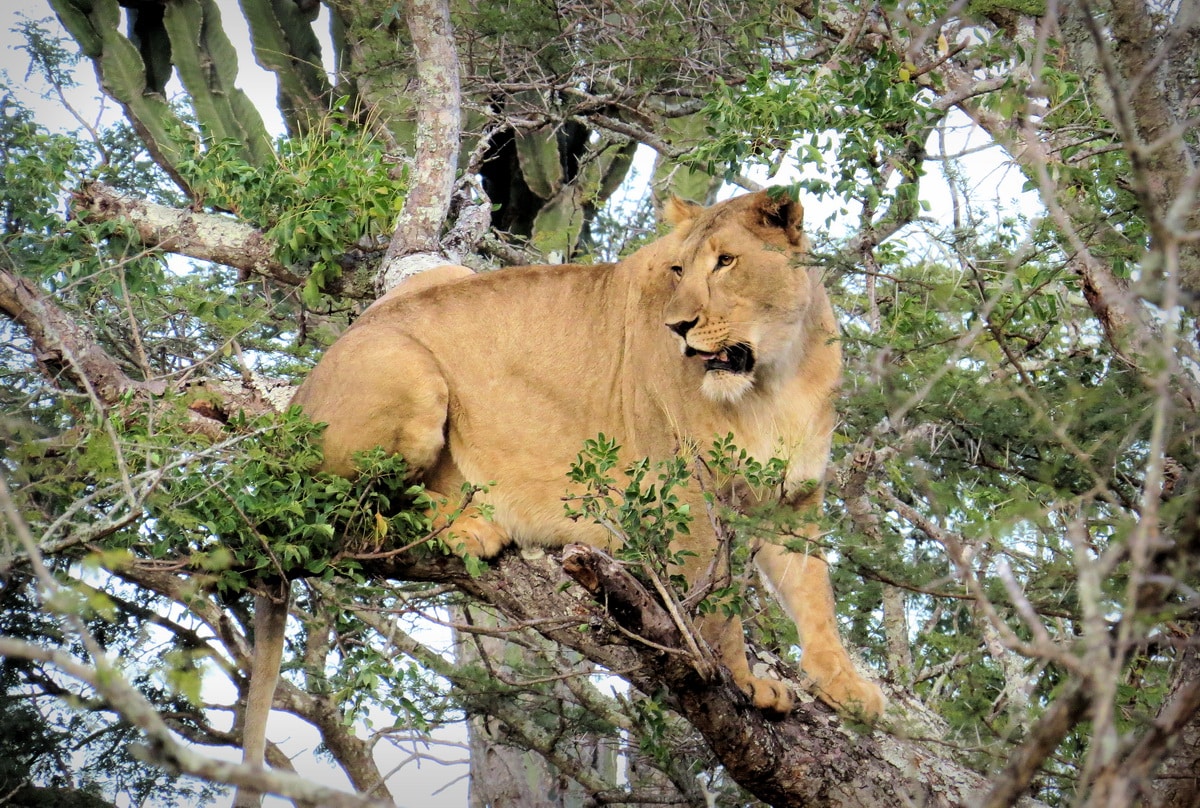 A Lioness moving to safety onto a tree 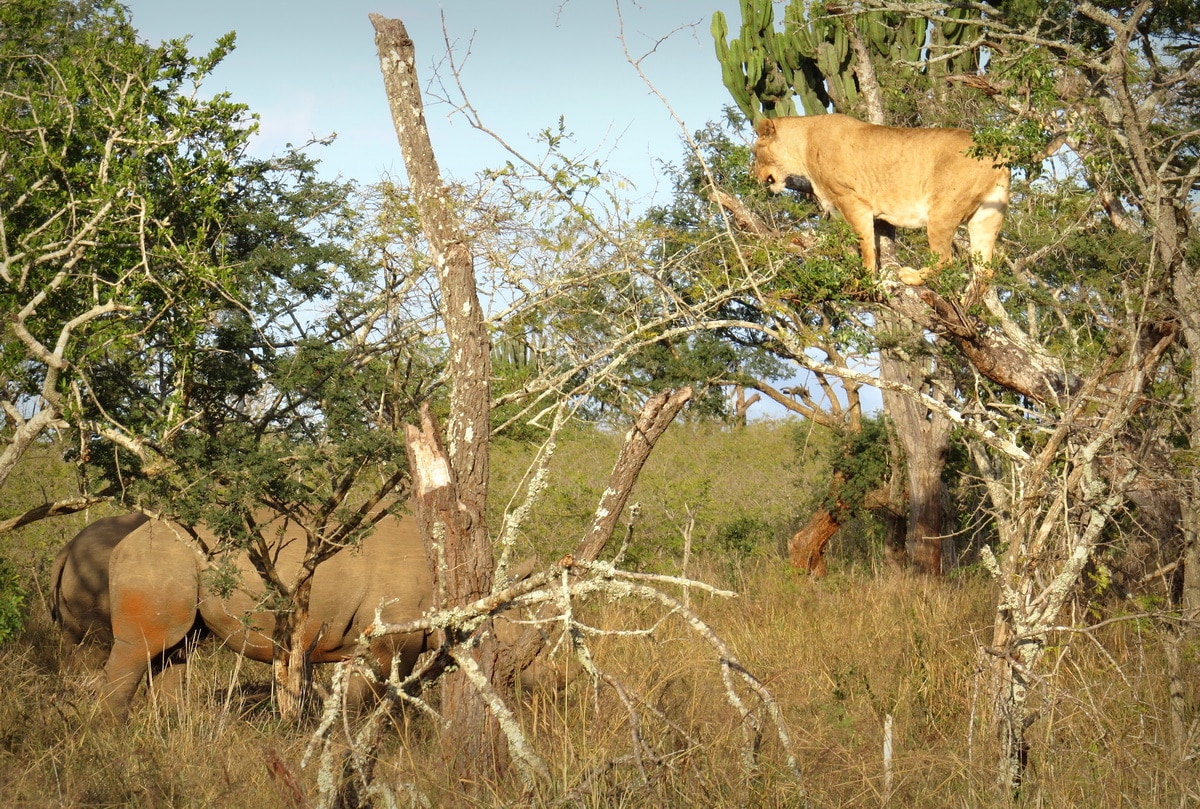