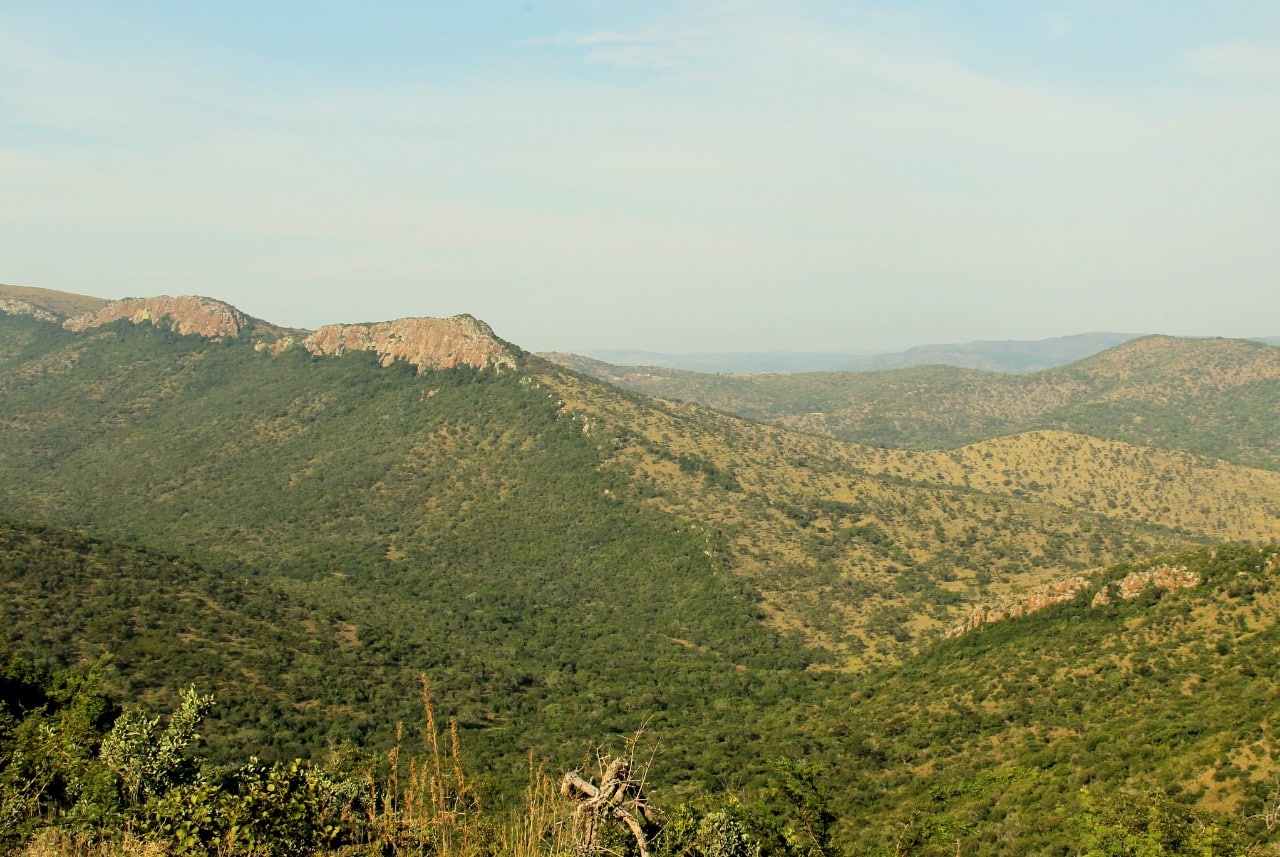 I’ve always found the distant past intriguing. And by distant past, I mean a time before the dinosaurs, and even a time before Africa became a continent, a time where our world would most certainly look like an alien planet providing, we could actually be able to see it. And if that distant past has, well, passed, everything is not lost, nonetheless. So how can we access this prehistory and what can we see of it today? The answer is under our feet; we need to look at the soils we tread and the rocks around us. Our time machine is called geology.
So where does the Thanda Safari Private Reserve take us back? First, let’s have a look at the land. The Thanda Safari Private Reserve roughly looks like a butterfly with a narrow north-south “body” axis and two wings spreading west (called Mduna) and east (called Thanda). Those two sides are very distinct, Mduna being hilly and dry, made of rhyolitic tuff, sandstone, shale, siltstone, mudstone, and grit, while Thanda is a flat grassy plain made of basalt. Rocks dip moderately to the east, resulting in younger rocks being encountered in an eastward direction, the age of rocks ranges from the Permian (270 million years ago) to the Jurassic (140 million years ago) periods and bears testimony to the onset of Gondwana fragmentation in the Jurassic.
So, the oldest rocks are found in the western outcrops and date back from the Permian period, where were we then? Much closer to the South Pole, first, quite far from where South Africa is today, and also quite far from any coastline. Indeed, Africa was in the middle of a unique super-continent forming the only landmass on Earth, called the Pangaea, and what would much (much much much…) later become Zululand was then bordering Antarctica. And it was fairly different from what we see today. It was much cooler, as we were completely under the ice of a gigantic glacier at the beginning of the period and Earth was warming slowly. The trees around us were conifers, as cycads started appearing, the only flying animals were primitive dragonflies and most insects on land were a primitive relative of cockroaches; but life on land was dominated by Therapsids, especially Dinocephalia. They were carnivores, herbivores, and omnivores, up to 2 tons, looking like no other animals we know and distant ancestors of mammals we see today (so including us!). But it would not be wise to stay too long with them since soon, approximately 251 million years ago, the Permian ends with the deadliest mass extinction on Earth, known as the Great Dying, wiping out 70% of life on land and 90% of life in the oceans. Pangaea also starts breaking up and at the beginning of the Triassic, we have the Laurasia in the north and Gondwana in the south. But Gondwana, comprising Antarctica, Africa, South America, India, Arabia, and Australia, also keeps breaking up and that takes us to the eastern “wing” of Thanda.
As we got separated from Antarctica, a large amount of lava was forced to the surface during various phases. First, we had very fluid basalt then more viscous rhyolite. With a new coastline formed on the east, rivers that were calmly meandering in an endless plain were now rapidly flowing in a new ocean and the accelerated erosion caused an escarpment to parallel to the coastline, and pulling away from it. This process led to the formation of the Lowveld, where the Thanda Safari Private Reserve is now. The increased erosion and movement of the Great Escarpment weathered down the basalt to wide, flat plains while the more viscous rhyolite formed a range of low mountains now called the Lebombo Mountains. All this geological activity since the beginning of the breaking-up of Pangaea also released tons of CO2 in the atmosphere, and oxygen levels plummeted from 30% at the start of our story to under 12% in the Triassic. 12% is now the equivalent of what we find over 4000 masl, which is higher than any permanent human habitations. So, if you’re interested in time traveling, don’t forget your oxygen supply!
But in spite of all this, life flourished again, and new ecological niches were quickly filled by new animals. Therapsids were replaced by Archosaurs (today our crocodiles and birds!), themselves replaced by the famous Dinosaurs after another mass extinction between the Triassic and Jurassic, while early mammals, small and unspecialized, were keeping a low profile. The land was still covered in conifers, but ferns also started to appear and spread quickly, but we’ll still have to wait a few million years more to start seeing flowering plants.
So, by the end of our geological journey 140 million years ago, we have laid the foundation of Thanda as we see it today, except that dinosaurs are roaming the land, mammals are patiently hiding and birds taking their first flight in a landscape of cycads and ferns! But the oxygen level is on the rise and will soon exceed the 21% we breathe today.
All that past is engraved in our rocks, but what about the future? If we can reach the distant past, what will travel to the distant future? Well, our time capsule might once again be under our feet! Of course, erosion, sedimentation, and all the geological activity is still happening, and all our present will one day be compressed into a single stratum visible on a cliff wall, but that’s not our capsule. Some early amphibians and therapsids have been found, here in KZN and in the Karoo, in fossilized burrows. Trapped in their dens by mudflows or sudden flood, the dead bodies can travel far in time to be revealed millions of years later; so, when we drive past aardvarks’ burrows or other warthogs’’ dens, we might have a glimpse of what will only be revealed in a very distant and foreign future, on a very distant and foreign planet.
Story by Vincent Hindson