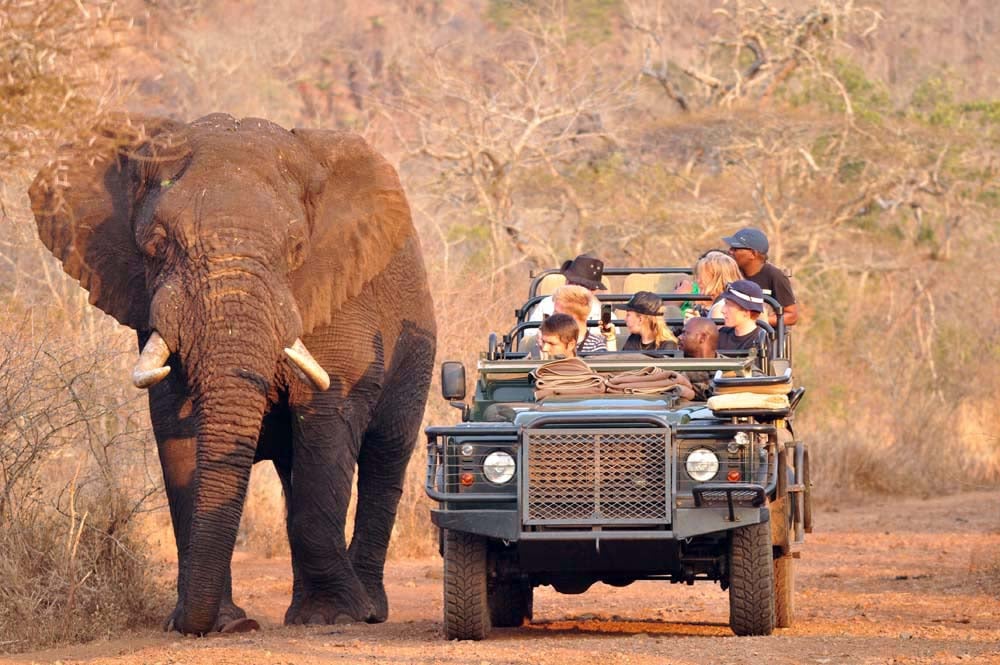 Before every game drive you will hear me tell you that we are safe in an open vehicle because animals don’t really see us as people in a car, but only see one unit, and that’s why it is important not to break the shape of this unit, not to startle them and not to make you visible as a person. But the question now is: how do I know? How do I know what animals can see? The short answer is that I don’t! But let’s have a closer look even so.
It is impossible to know how other animals see the world because that would mean knowing how a different brain, completely alien to ours, processes visual stimuli and what actions are taken according to these stimuli. Videre est percipere in a way. But what we can do is to study the eye structure – what cells, photoreceptors, membranes, etc. are in the eye – and to determine the nature of the visual stimuli before they get processed: does the eye see variation in light intensity, shapes, contrasts, colours, and which colours, details etc. There are too many animals (and at least twice the amount of eyes!) to speak about all of them now, so let’s focus specifically on one of the Big 5 that is considered as potentially dangerous even in a vehicle, being the elephant, and how could a game viewer with guests appear to their eyes.

First, their eyes are not big, being only 3.8cm in diameter, whereas a human being’s eye is 2.5cm. Their eyes are located on the side of their head, which gives them good peripheral vision rather than binocular vision (what humans have). As a result, they definitely do not have the depth perception that humans have, but seeing well around them is not a problem at all. If you happen to follow an elephant closely, whether on foot or with a car, you can see them moving their head slightly to the side and observing you out of the corner of their eye even though you are almost completely behind them. Or when they just cruise past the game viewer and tilt their massive head a bit downward, and this small eye seems to look at you asking “why are you so small?” I just love those close interactions with elephants!
Elephants are near-sighted and are believed to only see up to 50m. That weakness is compensated by other acute senses, especially hearing – the big ears are conspicuous enough! – and smell – you often see them pointing the tip of the trunk up and in your direction even from quite a distance, using it like a smell-detecting periscope! But more interestingly, their colour vision changes between day and night. Indeed they have what is called arrhythmic vision: they only have two kinds of colour-receptors in their retina, being red and green (humans have three, being red, green, and blue). So it is like the colour-blindness we call tritanopia. Even if that doesn’t seem to be absolutely clear since some authors claim they lack the green receptor, which would be like deuteranopia. Honestly thinking about elephants seeing the world in red and green seems crazy and I like the idea! But, and that’s truly crazy, during the night, the receptors change and become more sensitive to violet light, so they can see well in low light. They also have sensitive rods, so overall they have a better low-light and night vision than us… as long as it is close enough. And that’s the trick, having effective rods, and less cones than us make their vision less sharp and less capable of seeing details. Indeed with cones come colours and high resolution, and with rods come light and motion sensitivity.
So elephants definitely see the shape of the vehicle and they will definitely see any movement within the vehicle, and that’s why you have to remain seated and still! And it works; I remember a great encounter with a young male elephant that was just walking a bit away from the herd. I was out in the open, just standing behind a big log so my legs were hidden, and from a distance, I was probably looking like a broken branch, being part of the silhouette. And the wind was in my favour so the elephant bull that was walking in my direction never realised I was there until he walked past the log and could actually smell me. Then I had a mock charge and a bit of trumpeting before he ran back into the bush, a very nice moment! But also proof of the rather poor eyesight of elephants, or at least, that they don’t rely on it as much as their other senses. However, I’m still convinced, or I wish that I’m not wrong saying that they know exactly what we are when they just take a look at us sitting in the game viewer as they calmly, yet intimately walk by!
Story by Vincent Hindson